Welcome to the end of the decade; the end of the 2010s; Al at Decade’s End. This is a miniseries where I celebrate the past ten years in video games, starting by talking about my favourite games from each year, and ending with the end-of-year extravaganza for 2019! The games I talk about here might not necessarily be the best of the decade, but they sure left the best impressions on me for one reason or another. This will be the last post of this kind, as I’ll be starting my lists next with my top 5 of 2019! And so, without any more delay, we begin our look at 2018!

If you’ve been with me since the beginning of Al Unlocked, then you likely know what I named as my top game of 2018, and it hasn’t changed in case you were wondering. But for those just tuning in, I’ll give a bit of an introduction. The year 2018 saw the release of a few games that I’ve spent a lot of time playing; games like Dragon Ball FighterZ, BlazBlue: Cross Tag Battle, Super Smash Bros. Ultimate, and Dead Cells. Dead Cells in particular stole my heart with an addicting roguelite formula and some of the tightest controls I’ve seen from the genre that always made me feel like such a badass whenever I got a really good run going. However, that all changed in September when I saw a Reddit post that didn’t have too much attention or visibility about a game with a title that caught my eye. I watched the trailer for this game and I was instantly on board. I’m glad I was, because it turned out to be one of the best RPGs of this decade, and I couldn’t put it down until I knew I had completed it. My top game of 2018 was, and still is, CrossCode. 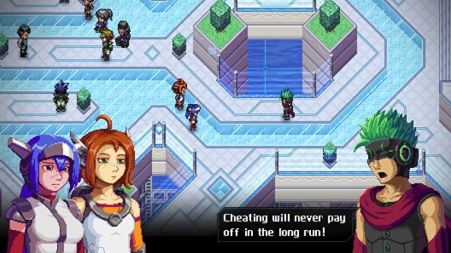 I had no knowledge of CrossCode in the slightest until I found that one Reddit post sharing the trailer for the game. The combination of the pixel art style, the soundtrack selections for the trailer, the gameplay mechanics in display, and the setting all captured my attention immediately. The game styles itself after classic action RPGs like Secret of Mana or the slightly more obscure Terranigma (please play Terranigma) while also taking some elements from classic Zelda games, but with a few unique spins that set itself apart from the classics, and an intriguing setting. CrossCode is set within a fictional MMORPG that your mute, amnesiac character is stuck inside. Your whole objective is to just play the game and your character might regain her memories and speech as you go along. The setup itself is simple and has been done many times before, but it leads to some twist that are pretty intense and unpredictable. I have to applaud the game for what it pulled off with the amnesiac main character trope.

CrossCode’s visual style makes use of tried-and-true 16-bit pixel art for the character sprites and environments, and beautiful hand drawn portraits for characters in conversation. It all comes together as a perfect fit for a fictional MMORPG setting. The 16-bit Super Nintendo inspired soundtrack just makes it so much better too, with a good amount of variety for any given situation from amazing overworld themes to boss battle tracks that remind me a bit of Falcom’s work with the (also amazing) Ys series.

In motion CrossCode combines fast-paced battle systems with Zelda-esque puzzle solving, and throws some ricochet physics into the mix that introduce a new emphasis on paying attention to your surroundings. Your character in the MMORPG CrossWorlds plays the unpopular Spheromancer class, a class that has both a high skill floor and skill ceiling within the context of CrossWorlds. Melee attacks aren’t your only important tool in combat; as a Spheromancer you also have the ability to fire energy balls at your enemies that have the ability to ricochet off walls and other hard surfaces. Your melee attacks and energy balls are also augmented by four different elements you earn throughout the game: heat, cold, shock, and wave. These four elements can also be tailored to your playstyle through Circuits, a sort of talent board system through which you can learn passive abilities and active Combat Arts by spending points earned through levelling. It’s a system that rewards experimentation and smart use of each element, and one where you can really see yourself improve as you progress through the game. The puzzles make use of each element as well, sometimes even using all 4 in a single puzzle, in a way that can be both frustrating and rewarding at the same time. All in all, it’s a well built system. 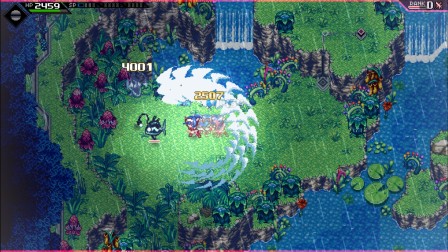 I hope people didn’t mind me raving about CrossCode for the second year in a row. I just love the game so much that it’s definitely within my top 10 of all time. I found it almost by pure chance, and I feel lucky that I found it and decided to take a chance on it. While originally releasing on PC, Mac and Linux, CrossCode is set to release on PS4, Xbox One and Nintendo Switch in the coming year. There really isn’t an excuse not to try this game in 2020. Not to mention that the developers are actively updating the game while also working on DLC. 2020’s going to be a good time to be a CrossCode fan. Please play this game. For me?