The hero shooter genre of games is one that has become quite saturated in recent times, after years of having Team Fortress 2 as being the only relevant game. Since 2015 we’ve seen games like Overwatch, Paladins, Lawbreakers, and Battleborn all take a shot at the genre, and those 4 are just to name a few. However, there’s been quite the variety in how successful these games have been able to draw in a crowd. Don’t believe me? Just compare how much of a cultural titan Overwatch has become to the fate of Lawbreakers (RIP). I’ve played my fair share of hero shooters over this time period as well; I played a fair amount of Medic in TF2, I was a tank main when I went hard on Overwatch, and I was a part of the closed testing period for Battleborn (RIP). Now, in 2020, we have a new addition to the genre in our midst. Bleeding Edge is looking to throw its hat into the ring in March. The twist? It’s not even a shooter. 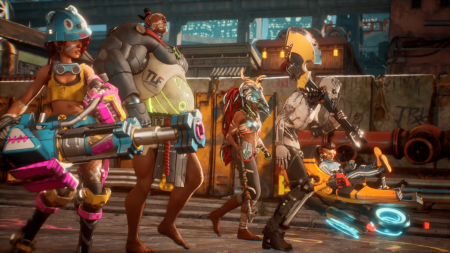 Bleeding Edge is Microsoft first-party developer Ninja Theory’s latest project, which is quite the departure from their most recent release. While Hellblade: Senua’s Sacrifice presented a powerful narrative highlighting a warrior’s struggle with psychosis, Bleeding Edge looks to be a bright and colourful brawl fest. It has all the same trappings of the modern hero shooter, with the main difference being that it’s almost all melee combat. I guess that makes it not a hero shooter. What would you call it, a hero brawler? Regardless, Bleeding Edge’s concept is all too similar if you’ve played the current kings of the genre, but Bleeding Edge is looking to put a unique spin on the gameplay.

Much like the other popular hero-based multiplayer games, Bleeding Edge has a very colourful visual style with ideas seemingly taken from games like Overwatch and Borderlands. The game has kind of a post-apocalyptic vibe to it, and all the playable characters look like the types of misfits and degenerates you would expect from such a setting. The character designs themselves are kind of a mixed bag, with only a handful of them really standing out for me, but it’s not like any of them look “bad” by any extent of the imagination. Character animations look really good and it made playing the game feel quite nice, which is super important for a melee-focused game like this. As far as music goes however, it’s only been a few days since I played the game and I have literally no memory of the music. Was there even music? If there was then the fact that I have no memory of it is a very bad thing.

The most important thing, of course, is my impressions of the gameplay. Fortunately, Bleeding Edge is really fun. I was honestly quite surprised with how much fun I had with it. The match format is 4v4 and there were two game types in this beta test: point control and power core capture. The games are very much objective focused, but there is some benefit to getting kills beyond just objective control as each kill gets your team extra objective points. Unfortunately the maps don’t seem to live up to the game’s bullet point of using the environment to your advantage. I never really found myself, or anyone else for that matter, using any one map’s hazards to their advantage. In fact, I found them to just simply be a hindrance at times, such as when a train would run over any power cores that were on the tracks and render them inaccessible for a short while.

Combat is obviously going to be Bleeding Edge’s main sticking point, since it’s a multiplayer combat game, and it doesn’t disappoint. The beta had 11 characters available to choose from, and since I mostly focused on three characters during my time with the game I’m basing my impressions on those three; damage dealers Gizmo and  Níðhöggr, and the tank El Bastardo. Níðhöggr’s skillset revolves around setting people on fire for damage based on the opponent’s maximum health, making him a good tank killer, Gizmo is a ranged fighter who can create turrets and jump pads to help assist her team while blasting foes from a distance, and El Bastardo excels at jumping into chaos and surviving as long as possible while the damage he deals is converted into extra health. Each character has a basic attack, a passive ability, three activated skills that have a cooldown, and their choice from two possible super moves. You could also summon a hover board mount to get around the map faster outside of combat. If I had to make a comparison with another game I’d say it’s a bit like SMITE with how you control and fight with your character. The controls themselves took a bit of getting used to, and locking on to enemies felt super wonky, but overall I had a good time.

Bleeding Edge surprised me with how fun it was, and I’m intrigued to see how the full release pans out. The game has a lot of potential and as long as the folks at Ninja Theory are on top of things with post-launch support it will go places. I just hope that the price tag is worth it, that or people decide to spring for Xbox Game Pass to play the game, because I really want to see this game have a good community. I’m also hoping to see more unique characters, improved maps or a wider variety of maps, and more game modes in the full version. In the end, I’m sold on Bleeding Edge, and I’ll be checking it out when it launches March 24th of this year on PC and Xbox One!