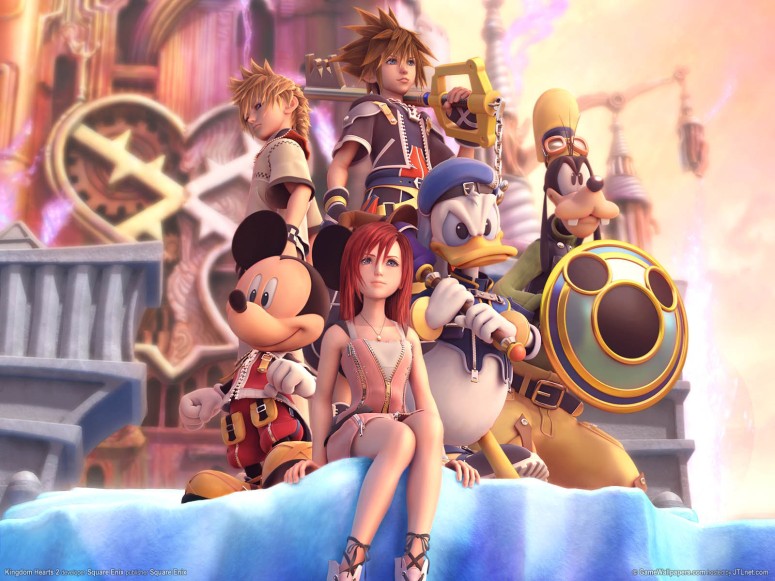 Japanese roleplaying games have always been a beloved genre in the west since the very first Final Fantasy released here on the NES in 1990. Over the years we have been treated to some of Japan’s…more odd offerings to the RPG genre. Some of these include a combination life-sim dungeon crawler where teenagers fight demons with manifestations of their psyche, an adventure through a dream world created in a delirious Frédéric Chopin’s mind during the last hours of his life, and one of the unlikeliest crossovers between Final Fantasy and Disney? Kingdom Hearts is one of the strangest series of games to grace consoles in the west; an action RPG in which a small boy traverses various worlds based on Disney classics, beat up both spooky shadow monsters and Disney villains, and occasionally chum it up with the likes of Cloud Strife and Squall Leonhart. Kingdom Hearts 2 is the 3rd game released in the series (blame spinoffs), and that’s the one we’re looking at today. Why am I doing 2 while not talking about 1? Couldn’t tell you. I’m specifically reviewing this game on the PS4 version on the hardest difficulty, Critical Mode. I’ve heard so many Kingdom Hearts fans claim that Critical Mode is the best way to experience this game, and that it’s almost a completely new experience compared to any other difficulty; I want to find out if that’s actually the case.

If you’re curious about my thoughts leading into this review, you can start reading my Progressive Looks series on Kingdom Hearts 2.

Kingdom Hearts 2 is the third game in the series following the adventures of Keyblade warrior Sora, mage Donald Duck, and knight Goofy after the events of Kingdom Hearts 1 and Chain of Memories. Sora, with no memory of what happened in Chain of Memories, is disappointed to learn that the Heartless are still around despite his best efforts, and that there’s now a new group of dangerous individuals known as Organization XIII with their own bad agenda. So it’s up to Sora, Donald, and Goofy to travel the universe and beat up bad guys while investigating Organization XIII and searching for Sora’s best friend Riku and King Mickey Mouse.

The PS4 version of Kingdom Hearts 2 is the PS2 version of Final Mix running at 1080p and 60fps, and it looks pretty clean. The cartoony/Disney visual style translates well to the current generation consoles for the most part. It’s not without problems though. As animated a lot of the characters are in story segments, there are some moments where they just like like horrific, lifeless dolls and it’s unsettling to see the game swap between the two looks multiple times in the same scene. It’s also not perfect under the hood. The framerate can get a bit choppy when there’s a lot of enemies and spell effects on screen, specifically Magnet spells. The remastered soundtrack, on the other hand, sounds amazing, and it’s one that I’ve found myself blasting quite a bit in the background whenever I do chores and the like. Great work by Yoko Shimomura.

The story of Kingdom Hearts is infamous for being a convoluted mess, and Kingdom Hearts 2 is where that all started. This game is where the series really started pushing the idea of alternate selves and light vs. darkness, and the rest of the series would go on to keep those ideas going, and your mileage may vary. I personally enjoy what Kingdom Hearts 2 has to say, but the fact that people feel the need to craft long video essays just to attempt to explain the plot is pretty brutal.

Kingdom Hearts 2 uses a real-time action based combat system that involves choosing your options from a command menu and executing them with the X button. Sounds pretty simple, yeah? One of the biggest strengths of Kingdom Hearts 2’s combat is that it’s very straightforward and easy to pick up the basics, and those basics are enough to get you through nearly the entire game on most difficulties. Critical Mode, on the other hand, will test you and your knowledge of the game’s systems, and will force you to get creative with your tools. Critical Mode lowers your health, increases the damage output of both you and enemies, and gives you a ton of high level passive abilities with the extra resources to use them right at the start. These tweaks are exclusive to Critical Mode, and are how you do a hard mode right. Instead of making enemies into damage sponges that take ages to kill as an artificial difficulty jump, you have a mode that’s incredibly punishing but also fair in which you kill fast but die faster.

Controls are tight and responsive, and with the ability to weave between physical attacks and magic, as well as abilities such as Quick Run or Dodge Roll, I feel like I have full control over my character. The ability to throw things like drive forms, limits, and summons into the mix make everything feel so much better too. A criticism I heard about Kingdom Hearts 2 going into this is that the combat is guilty of style over substance, but that couldn’t be any further from the truth. It’s a very flashy game, yes, but if everything I’ve said so far hasn’t made it apparent yet, there is a surprising amount of depth to be found in the combat of a game where you hang out with Winnie the Pooh at one point. The game does a god awful job of explaining this depth to the player though, with annoying tutorials in menus that don’t fully explain certain mechanics like limits or summons. With a bit of digging in the game’s menus you can find some of this information, but it’s not enough to get a decent idea of everything. This is one of the biggest detriments to Kingdom Hearts 2. However having said that, playing this game on Critical Mode has brought me some of the most fun and satisfaction out of any action RPG.

Apart from the combat, there’s a whole load of side mini-games to play if you want to take a break from beating up bad guys. Unfortunately, only one of these mini-games are even remotely fun: the Gummi Ship. The Gummi Ship missions are a series of on-rails shooter segments not unlike Star Fox where you fly a ship that you either build yourself or pick from a selection of unlocked blueprints. Each Gummi Ship mission requires one run to access the world it’s locked behind, but there’s extra modes and difficulties available after those first runs if you want more. Too bad the Gummi Ship missions give you no rewards outside of the ship, while the other awful mini-games do. I’m talking about Atlantica, a series of poorly done musical rhythm games required for the Blizzaga spell and a Keyblade, and 100 Acre Wood, an assortment of other mini-games required for the Curaga spell and another Keyblade. If you want every weapon and magic spell, you need to do these worlds that are an unfortunate blemish on this game and aren’t worth doing otherwise.

Kingdom Hearts 2 on Critical Mode was an amazing experience that I enjoyed (nearly) every minute of, and it’s easy enough to look past the game’s shortcomings to really enjoy what the base game has to offer. I recommend the base game on most difficulties for any RPG fan, and anyone with a passing interest in Kingdom Hearts for whatever reason. Critical Mode on the other hand, is a different story. If you’re a hardcore fan of RPGs, action games, or Kingdom Hearts and you’re willing to really dig in and experiment with the different mechanics, I say that this is one of the best offerings on the market. If you’re impatient, or just a casual fan, then I recommend that you pass on Critical Mode and just play Kingdom Hearts 2 on Normal or Beginner Mode.

I give Kingdom Hearts 2 on Critical Mode a Tentative Recommendation.