Last time, we had just completed Terra’s quest to investigate a bunch of Disney worlds and beat up bad guys. Since then, Ventus went on a journey of his own to find some new friends because his current ones were mean once. This time I’ve been thinking about the world design and enemy design, and I want to share my thoughts on that plus Ven as a character.

Ventus differs from Terra in his gameplay style. Whereas Terra was a bruiser who favoured brute force over all else, Ven is a more agile character who fights using a reverse grip on his Keyblade and is equally proficient in physical and magical ability. His attacks and dashes are fast, and a lot of his exclusive commands compliment his speed. One type of command that I didn’t mention last time that’s available to all characters is the Shotlock. Shotlocks are a sort of super move that involves you aiming a cursor to lock onto enemies before unleashing a big attack. Terra’s commands for the most part have a motif around earth and darkness, and Ven’s commands focus on wind. Ven’s speed and agility feel a lot better to control compared to Terra, and overall I had much more fun playing as him.

The world design of Birth by Sleep is a bit of a mixed bag for me so far. Many of the worlds feature the Disney princesses from KH1 that didn’t make an appearance in KH2 such as Aurora from Sleeping Beauty, Cinderella, and Snow White. They’re all pretty short with most of them clocking in at under an hour to complete, but there isn’t a whole lot to them that makes them memorable either. As of right now the most creative setting I’ve seen is Ven’s run through Cinderella’s world, Castle of Dreams, in which he’s shrunk down to the size of a mouse and has to help finish Cinderella’s dress before the royal ball. Notice that I said “Ven’s run”. Each character has their own separate adventure in each world, so seeing the same worlds three times most likely won’t get stale. They haven’t yet after two playthroughs. 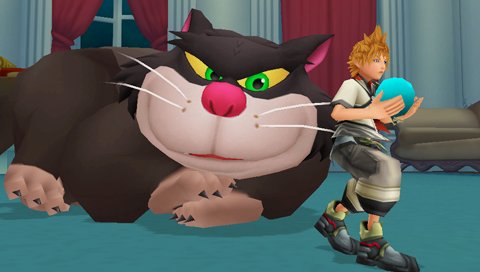 The enemy design has become a sore point for me in this game, and Ven’s story takes a lot of the blame for that. The regular enemies themselves, the Unversed, aren’t as varied as I would have liked, and quite a few of the enemy types aren’t fun to fight at all. You have the large bodied enemy that turns into an invincible suicide bomb if you attack it too much, there’s the plant that will snipe you with projectiles from some unknown location and interrupt you and also release a toxic cloud when you get even remotely close to them, and there’s bird that will spend most of it’s time flying 50 feet above you so you can’t do anything to it. Enemies like this make it feel like there’s a lot of downtime during combat while you’re waiting for something to die or to get into range to attack. Then there’s the boss design, and holy is the boss design rough. The bosses in this game seem to just do what they want regardless of whether they’re taking damage or staggered or whatever else. You could get a staggering hit, but then the boss would immediately break out of being staggered and teleport behind you (nothing personnel kid) for their own big hit. You would think that it would encourage patience and restraint in combat right? It would make sense because a lot of the harder fights in KH1 and KH2 do the same thing, but it’s extremely counter-intuitive in Birth by Sleep. A lot of mechanics in this game require you to keep pressuring enemies and if you don’t do that then you lose out on finishers. Again, doesn’t sound that bad until you realize that Ven’s final boss fight requires you to build up to a finisher and use it, and that he can just tank through your commands and kill you mid command.

I’m still enjoying Birth by Sleep despite everything bad I’ve said about it, but so far I’ve seen some really dumb design choices. I’ve warmed up to the combat since last time, but that might just be because I like Ven more than Terra. Next time I update we’ll have gone through our last character, Aqua, and we’ll see how my opinions of the combat hold up. Stay tuned!