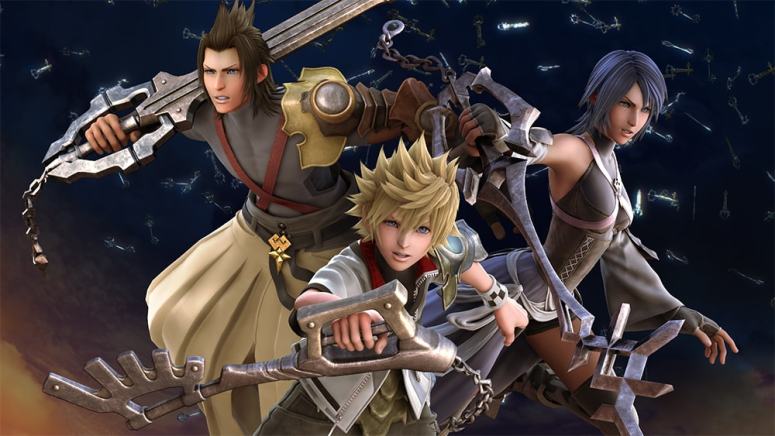 Curious about my first impressions? Or second impressions? Take a look at my Progressive Looks series on Kingdom Hearts: Birth by Sleep.

Kingdom Hearts: Birth by Sleep follows three separate Keyblade warriors: Terra, Ventus and Aqua. Various circumstances lead all three characters to leave their home world for some reason or another. Terra leaves to investigate a monster threat known as the Unversed and to find missing Keyblade Master Xehanort as a second attempt at his failed Mark of Mastery exam, Ventus leaves in an attempt to find Terra in the fear that something bad will happen to him, and Aqua leaves for the same reasons as Terra while also spying on him in case he can’t control his inner darkness. Their journeys take them to many different worlds, and their paths cross many times both directly and indirectly. With twists and turns all along the way, will the heroes have a happy ending?

Playing this game on the PS4 felt pretty nice, with no performance problems of any kind to speak of. Much like Kingdom Hearts 2, and the rest of the PS4 collection, it runs at 1080p resolution and 60fps. Unfortunately, also much like Kingdom Hearts 2, there are a lot of moments where character models frequently swap between low quality and high quality in during story cutscenes, and it’s almost more jarring than KH2. It makes sense that it would be like this in BBS though, since it is a port of a PSP game. I can’t fault the game too much but it still looks pretty ugly at times. The soundtrack by series composer Yoko Shimomura is still amazing, as per usual, only reusing a couple of tracks from previous games.

The story structure of this game is cool, with one main story campaign per character. Each character visits the same worlds, but do different things and visit different areas in those worlds with little overlap. It’s also pretty neat seeing characters cross paths for brief moments, like when Terra and Aqua meet in the entrance hall of the royal palace from Cinderella. The story itself is weird; as a prequel it’s important to the overall plot of the series, but it just complicates things more. Furthermore, the characters themselves are a mixed bag. Terra is extremely stupid and constantly makes things worse, Ventus was bearable and had a somewhat tragic backstory, and Aqua is clearly the smartest character out of the three but spends all of her shared screen time with the other protagonists nagging and berating them. 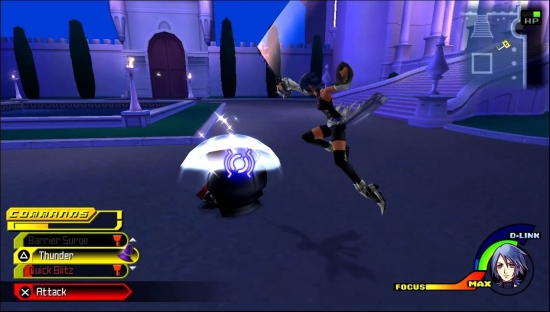 Kingdom Hearts: Birth by Sleep keeps the real-time action combat the series is known for, but introduces a twist. Enter the Command Deck system, where instead of having sub menus and shortcuts for things like summons, spells, and other special moves, everything is set to one of your Command Deck slots. You have your basic attack on X, and pretty much any other move you could think of on Triangle. A few exceptions to this are the D-Link, a mode which gives you stats, commands, and finishers of characters you’ve forged a bond with throughout the story, and the Shotlock, a super move that unleashes a big attack after lock on to enemies with a crosshair. Overall I had a lot of fun with this system, but it has a lot of issues to go with it that I’ll go through one by one. First of all, the physics have been changed in such a way that make control over your character seem less precise compared to other entries. Hardcore KH fans would call this one of the “floaty” KH games, and I have to agree with them here. It feels like your character stays in the air for much too long for a game series that punishes you for being in the air for an extended period of time. Combat itself also doesn’t feel as good as previous entries. Basic physical attacks are clunky and you can’t always weave them with your commands, so it’s almost pointless to use basic physical attacks over just spamming commands and Shotlocks. D-Links don’t feel that useful either, outside of just an instant full heal in case your Cure spells are on cooldown. The commands themselves can be levelled up and fused together for stronger commands and passive abilities, which was honestly my favourite part of this game. I just loved the feeling of constantly levelling up my abilities and experimenting with them to see what worked and what didn’t.

Birth by Sleep has a lot of mini-games packed inside it, most of which are required to play unfortunately. Most of the mini-games are in Disney Town, and each one of those are required to play at least once to complete the world in each character’s story. Terra has to win a racing mini-game which doesn’t control well at all, Ven has to play a boring rhythm mini-game, and Aqua has to play bizarro volleyball. That one’s actually alright. Then there’s the mother of mini-games in Birth by Sleep: the Command Board. This is basically Monopoly: Kingdom Hearts Edition. There’s a variety of boards, each based on a different world, with different spaces that you buy with points and force the players that land on it to pay you points. The real gimmick with the Command Board is the command cards that you play with. You have a hand of 5 cards taken from all the commands you own, and you place those cards on the spaces you buy. Cards can also be used for a variety of different effects, like an extra dice roll or causing an opponent to miss a turn. The nice thing about the Command Board is that it provides the tangible benefit of levelling up the commands you used as cards, and even gives you new commands and Shotlocks to use. Too bad Monopoly is pretty boring when you have no friends.

Kingdom Hearts: Birth by Sleep is a game that I got a lot of enjoyment out of, but for entirely different reasons than previous entries in the series. It almost feels like decisions were made to turn this game into more of an RPG and less of an action game; doubling down on RPG mechanics and toning down on the complexity and depth of the action. If you haven’t yet played this game and you’re into the Kingdom Hearts story after playing previous titles, or if you’re really into action RPGs, I recommend this game. Otherwise, give it a pass and just wait for Kingdom Hearts 3.

I give Kingdom Hearts: Birth by Sleep a Tentative Recommendation.