It’s first impressions time! I’ve played a good amount of Kingdom Hearts 3 and I’m ready to give my thoughts on it so far. KH3 starts of extremely strong, which is unheard of in a numbered KH game. KH1 had you spend the first few hours in the Destiny Islands while being introduced to the main gang, and KH2 had you spend a few hours in Twilight Town as newly introduced Roxas. KH3 starts you off in Olympus immediately following the end of KH0.2 while fending off an attack on the city of Thebes staged by Hades, the Heartless, and the Titans. The game tells you that this is the introduction in a clever way by calling the game Kingdom Hearts 2.9 until a certain point. The introduction overall is really well done for introducing you to the game, with an optional tutorial at the very beginning on the basics and having the newer and more complex mechanics being introduced over the course of the sequence. This all culminates in a visually impressive boss fight against the Titans in the Realm of the Gods, using Zeus’ prison as a foothold to attack them. Visually the game has impressed me, but it’s super jarring to play a 30fps KH game even though my experience playing KH0.2 should have prepared me for it. I’m not sure how it works on a base model PS4, but the PS4 pro provides an option to lock the framerate at 30fps, or unlock it to wherever it can go. I’ve stuck with the locked setting because I’m worried about frame drops below that 30fps mark, and I haven’t been disappointed. 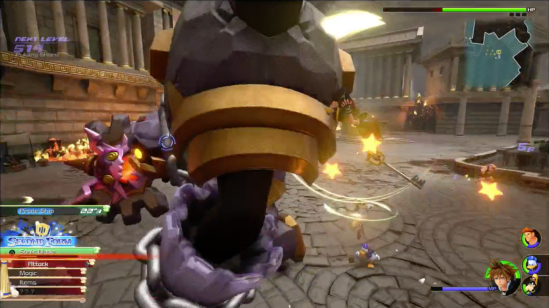 Combat works a lot like the main numbered titles and KH0.2, with your command menu and situation commands providing you with most of your combat options. However, new to KH3 is the ability to equip multiple Keyblades at once and swap between them on the fly. Each Keyblade has it’s own abilities, Shotlock commands, and Formchanges. What’s a Formchange? Formchanges are KH3’s take on Styles from previous games, a temporary power-up that changes your moveset, and in most cases transforms the Keyblade into something entirely different. The combat is fun, flashy, and it feels great, with a lot of stylish finishing moves and summons from situation commands. However, I’m worried that the game will focus too much on the flash and style and have a problem with style over substance. I don’t expect the combat to be like KH2 combat since that game came out over a decade ago, but I want there to be some depth and have it not be as braindead as Birth by Sleep or Dream Drop Distace.

How will the combat evolve? What sort of mini-games will there be? How will the Gummi Ship be implemented? Stay tuned!